California’s super-majority Democrat legislature just passed, and the governor signed a “balanced budget” that looks like Orange County before it filed for bankruptcy. It has been 25 years since “AA” credit-rated Orange County filed the world’s largest municipal bankruptcy, following a $2.6 billion loss involving a failed leveraged borrowing scheme and accounting fraud. But despite bankers, lawyers and accountants paying $750 million for allegedly aiding OC risky taking, “AA” credit-rated California has not filed audited financials and is using leveraged borrowing to offset its $60 billion shortfall.

Since about a third of the money lost in the OC bankruptcy involved federal grant program dollars, Congress tightened the A-128 Single Audit Act in 1996 to require all state and local recipients of federal grants to file an audited financial statement within 6 months of fiscal year detailing each “noncompliance” that could ‘have a direct and material effect on these individual Federal programs.”

The US Office of Federal Assistance Management (OFAM) that provides administration and assurance of the financial integrity regarding about $750 billion in federal grants has mandated that each state and local grant recipient must submit an audited Comprehensive Annual Financial Report (CAFR) within 9 months of the last day of their fiscal year. Consequences for grant recipients that to comply with the OFAM mandate include withholding a percentage, suspending or terminating federal grant monies.

In spite of over one third of California’s budgets coming from the federal government, the state defaulted by not filing its Fiscal Year 2017-2018 Comprehensive Annual Financial Report (CAFR) until June 2019. Furthermore, California also chose to sell billions of dollars of municipal bonds in 2019 without an audited financial statement.

In spite of over one third of California’s budgets coming from the federal government, the state defaulted by not filing its Fiscal Year 2017-2018 Comprehensive Annual Financial Report (CAFR) until June 2019. Furthermore, California also chose to sell billions of dollars of municipal bonds in 2019 without an audited financial statement. 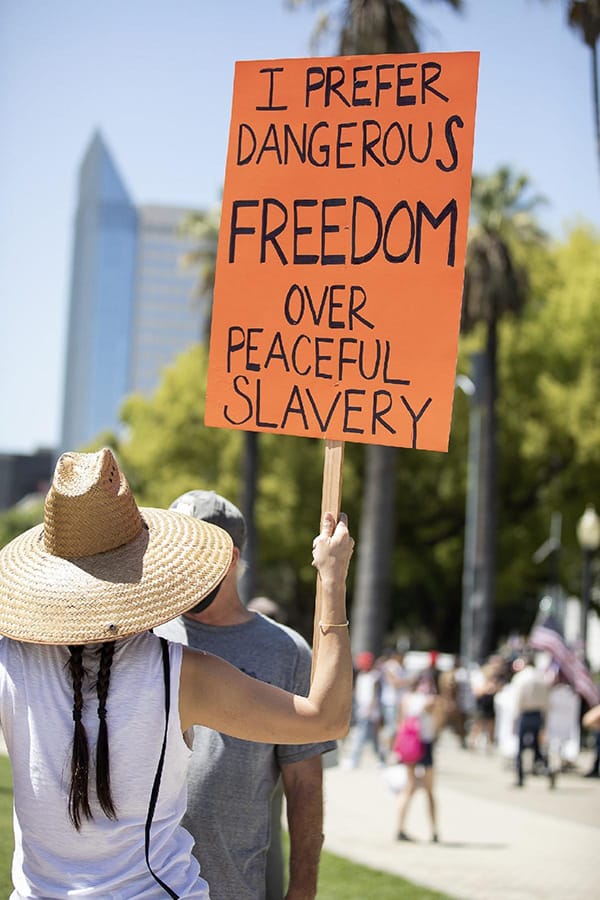 The California Auditor issued a 33-page warning after the 2017-2018 CAFR was filed about 90 days beyond the nine-month OFAM deadline stating: “Deficiencies in the State’s internal control system could adversely affect its ability to provide accurate financial information.” In spite of the federal mandate and State Auditor warnings, California has been in default since March 31 for not filing its 2018-2019 CAFR on time.

California’s $202.1 billion budget that began on July 1, 2020 relies on spending $8.8 billion in a so-called “rainy-day fund” and cutting spending by $11.1 billion, including $2.8 billion in savings by slashing state worker salaries by 10 percent. But the California State Controllers’ monthly ‘General Fund’ report for May indicated that the state can internally fund its budget shortfall from $59.7 billion in “Borrowable Resources”.

California’s revenue collapse means that about 40 percent of its 2020-2021 state budget and “Borrowable Resources” are forecast to come from federal grants. Given the state has been in default since March 31 for not filing its 2018-2019 CAFR, up to $80 billion of federal grant funds is at risk from being withheld, suspended or terminated.

Gov. Gavin Newsom seemed optimistic that the state’s economy and tax revenues would continue recovering from the COVID-19 coronavirus pandemic when he signed California’s “balanced budget” on June 29th. But with the number of new cases rising, Newsom on July 1st ordered 19 counties to close all bars and ban indoor operations for all restaurants, wineries and tasting rooms, movie theaters, family entertainment centers, zoos and museums and card rooms for a minimum of three weeks