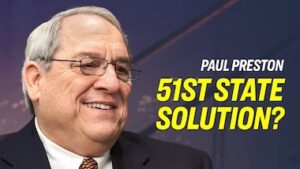 Paul Preston  is the founder and president of the movement for a New California State.

Starting with Karl Marx and the Communist Manifesto, Paul takes you through the journey of how National Socialist / Fascists (NAZI), Communists and Islamists have forged themselves into what Paul calls the “Three Pillars of Totalitarianism…Communism, Naziism and Islamism.” Using the United Nations, these three pillars are using environmentalism, terrorism and social engineering as their tools to redistribute America’s wealth and enslave our people for the “greater good.”

Paul engages your political and cultural norms in meaningful debates over race, government and education. Paul presents reasoned analysis on many of the myths apparent in our system of government, our society, and the media.